There is a technique that many people are still unaware of and which allows us to correct some aesthetic flaws in the nose without having to resort to surgery.

It is a method called “medical rhinoplasty” that involves injecting filler products such as hyaluronic acid.

This procedure, when performed by a fully qualified and experienced doctor, allows us to instantly correct the appearance of the nose without anaesthetic, surgery or pain.

Reminder of the external layout of the nose

The nose is spilt into 3 separate parts, which are:

The dorsum is the “ridge of the nose”. It occupies the top two thirds of the nose. Its skin is attached to the nasal bones at the top and to the cartilage at the bottom.

The columella is the area that separates the two nostrils. It follows on from the nasal cavity.

The nose seen from different angles

Because of its central position and its volume, the nose occupies a prominent place in the face.

It can have many different appearances, among which we often find:

The shape of the nose can change with age because, just like the ears, this organ never stops growing. 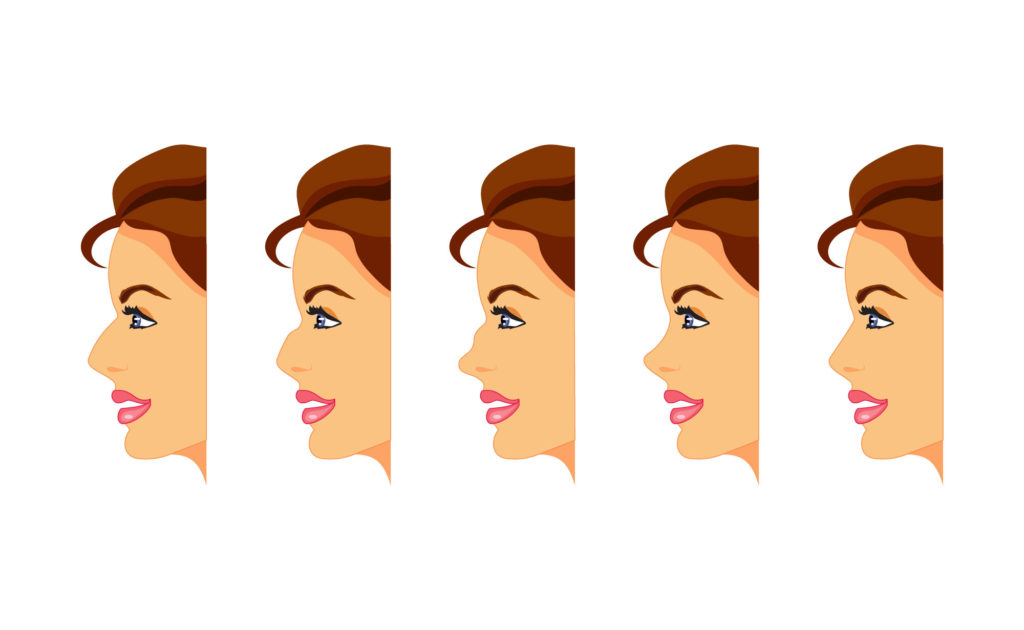 When the nose’s appearance is altered voluntarily (either surgically through rhinoplasty or medically with filler products) or involuntarily (usually after trauma), the face and, above all, the expression also change.

We must therefore only try to change the nose’s appearance if it is a source of hang-ups or significant discomfort for the patient.

The technique that is by far the best known is cosmetic surgery. This involves rhinoplasty, which requires a hospital stay, a general anaesthetic and around ten days’ downtime due to the bruising and swelling caused by the surgery. The final results are visible after a few months and only rarely is further surgery required.

There is, however, another lesser-known technique, called “medical rhinoplasty” or “rhino-modulation”.

This involves correcting certain visible defects (not internal defects such as a deviated septum) using gentle injections – which barely hurt at all – of resorbable filler products containing hyaluronic acid.

These ever more popular techniques are handy for patients who are concerned about their appearance and dislike the shape of their nose, but do not want or are unable to undergo surgery.

The usual counterindications for this type of procedure are:

How the procedure is carried out

The doctor examines the nose from the front then the side and considers the patient’s request.

They can then say whether this “gentle” nose correction treatment is feasible or not.

More specifically, they will analyse the 3 main potential angles to inject:

These angles are numbered because this is the ideal order in which the injections should be carried out.

However, we do not necessarily inject all three angles in every patient. Injecting into angle 1 will lift the tip of the nose and treat, for example, a “hooked” or droopy nose. It also supports the columella in patients whose nose tends to move a lot and collapse or flatten when they talk. The nose will move less, or even not at all, after these hyaluronic acid injections.

Injecting into angle 2 is good if the tip of the nose looks snub after injecting angle 1 (obtuse or open angle). Often patients want to preserve this slightly concave angle, as they think it looks glamorous. 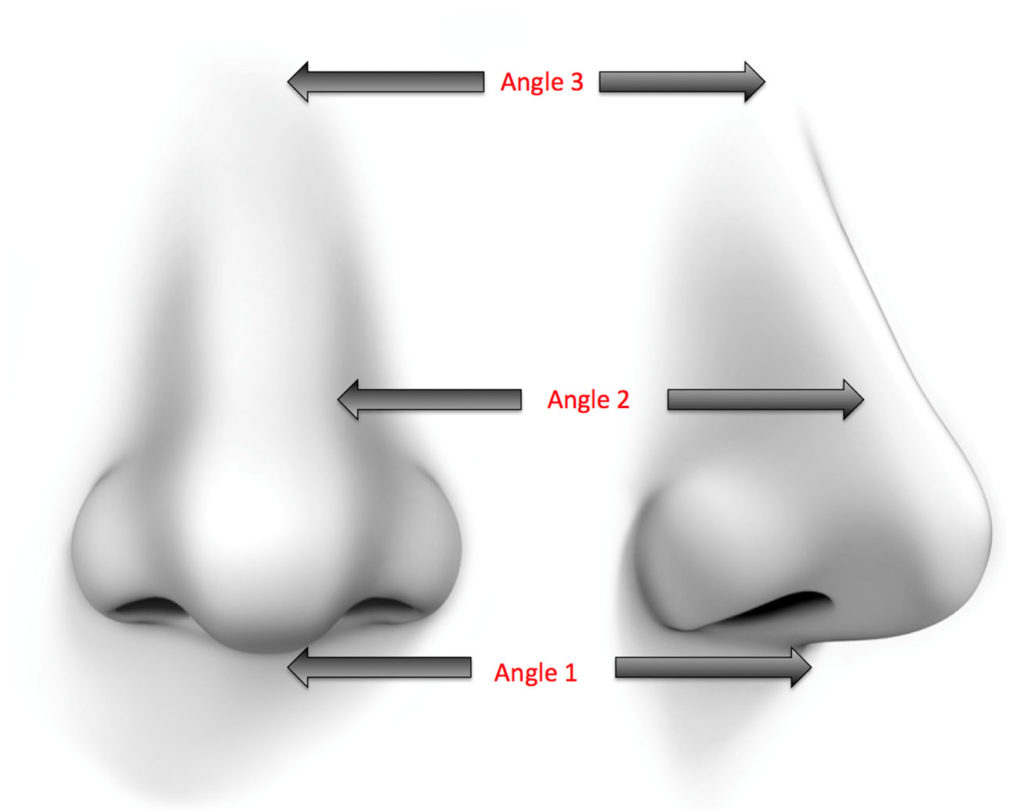 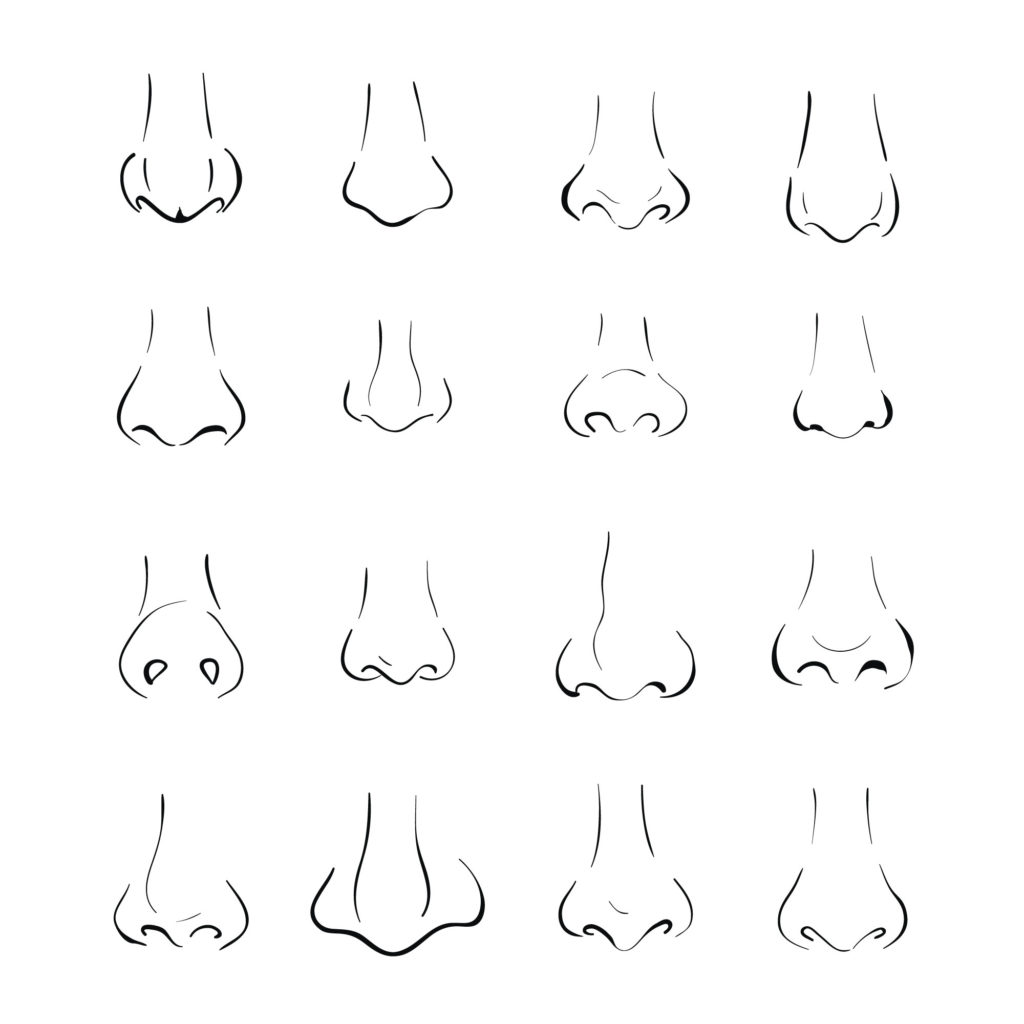 Injections into angle 3 should be very mild if there is a significant hollow between the area between the eyebrows and the nasal dorsum.

We must understand that the skin is elastic and that the injected product will settle over a few days thanks to its elasticity. If, at the day 21 check-up, the hollow is not sufficiently filled, we inject angle 3 again.

The important thing is not to inject too much filler product in one go into this area, otherwise the product may migrate to the sides and enlarge the nasal ridge.

It is therefore better to “under-correct” at first instead of “over-correcting” and it is better to see the patient again after around 21 days to potentially perform another injection and take “after” photos.

Whatever the number of angles injected, this procedure takes just a few minutes and is performed in a doctor’s surgery. What takes the longest is the medical interview and the detailed clinical examination that determine whether or not medical rhinoplasty is a suitable option.

The patient does not really need to prepare for treatment in any way, apart from:

These two precautions allow us to limit the risk of bruising after the treatment.

Results of medical rhinoplasty, possible side effects, duration of results and price

The results of the injections will be visible immediately after treatment.

Over the next few days, some swelling and bruising may appear, but they are easily camouflaged with concealer and will generally disappear after a week or so.

As stated above, a check-up is required around 21 days after the first set of injections, so that any touch ups can be made once the swelling has subsided.

Between the two appointments, avoid wearing glasses if they rest on the injected area so that you do not displace the freshly-injected product.

Depending on the product injected, the aesthetic effects will last between 6 and 9 months after the first session, then about a year or even longer after subsequent treatments.

Therefore, to continuously maintain the initial results, we recommend having one injection every six months on average, which allows us to inject less filler product in the subsequent sessions, as well as potentially reducing the cost of the procedure.

The fee for this type of procedure depends on the work to be done and the quantities injected to perform the medical rhinoplasty. On average, it generally costs between 650 and 800 euros for the first injection, then less for subsequent sessions.

Medical rhinoplasty or rhino-modulation is one of the non- or mildly-invasive techniques available in aesthetic medicine.

It is a temporary treatment that offers an alternative to aesthetic surgery and only aims to correct cosmetic flaws as opposed to the nose’s internal defects.

This technique allows us to improve the patient’s profile, making it softer after injection, and relieve a number of hang-ups due to an unsightly profile.

These injections are safe because they use 100% resorbable and natural products.

However, be careful of injections that are carried out in a “clandestine” way by unqualified people (beauty therapists, nurses, medical assistants, make-up artists, etc.). This procedure must only be carried out by an expert doctor who will treat you in complete safety and in optimum hygiene conditions, and will be able to deal with any complications, if they arise.

Member of a certified management association

Ashley S
Dr. Schinazi does amazing work but what stands out is his commitment to patient satisfaction. He is always honest and realistic about what is possible, but does his very best to ensure his patients are happy. Very kind, incredibly professional, and worth the wait to get an appointment.